Lessons From and For Hiring Managers

This post first appeared on the Read the Docs company blog

Over the last four weeks, the Read the Docs team did dozens of customer development interviews with engineering hiring managers. We wanted to learn more about hiring processes at various companies with the ultimate goal of building a product to help companies find developers. We talked to people looking for talent at five person companies all the way up to the biggest names in tech. In this post, I am going to cover some of the common things we heard from hiring managers and share some ways for hiring managers to improve their company's process. In our next post in this series, I will have some actionable tips for job seekers based on the same interviews.

Why is Read the Docs tackling hiring? Hasn't that been done?

While we didn't initially think about Read the Docs ads for recruiting, based on some unexpected past successes](hiring-developers-with-readthedocs.md), we decided to position promoted jobs as one of our main verticals within our advertising. Rather than dash forward and create a product, however, we started by just talking to hiring managers to understand the hiring process better so we can best meet their needs with something we create.

One of the questions we asked in our interviews was how long it took to hire their most recent developer? Specifically, we asked hiring managers to consider how much time they and their team spent sourcing candidates, filtering resumes, preparing for and doing phone and onsite interviews, and anything else. Internal recruiters' time is valuable too, but we figured the hiring manager would probably underestimate how much time the recruiter spent since they didn't directly observe it. While answers were all over the place, the range with the most overlap was 50-100 hours of engineering time to make a hire. No huge revelation here, but companies make a massive investment in hiring.

From my days being an interviewer at Qualcomm and Amazon as well as a smaller startup, I'd say fifty hours is on the low side for big company but about right for a smaller company. When something costs 50+ engineering hours to do, any improvement is worth a lot of time and money and at Read the Docs we believe we can help significantly here.

It was no big surprise to hear that referrals were the top hiring channel. The second best channel was a bit of a surprise with local meetups and local communities being very high in a majority of interviews although this was less true among the largest companies we talked to. Companies also had some success with recruiting at conferences, using various job sites, and proactive outreach.

Hiring managers shared strategies with us that they used to increase the number of referral and community candidates they got. Two different companies we talked to hosted multiple local meetups at their offices and one of those hiring managers said "being plugged into the community" was their main channel for hiring.

Another hiring manager who focused a lot on developers with security experience talked about having "LinkedIn parties" where either a hiring manager or internal recruiter sat with engineers on their team one-on-one to go through their LinkedIn network. Even when he heard a person "is great, but they'll never change jobs", that was a good candidate to target. Security is such a high demand field, he said, that very few great people are actively looking for a job. 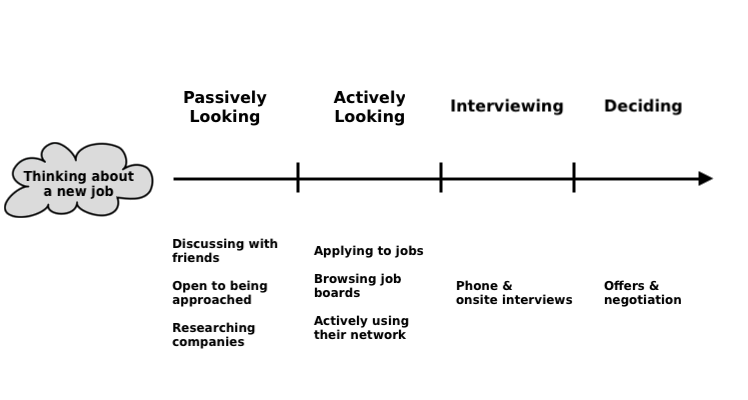 One of our biggest takeaways from the interviews was that companies wanted to reach candidates before they started actively looking. Most of the hiring managers we talked to stressed the importance of getting in front of passive candidates. Certainly fewer people are actively looking for developer jobs than those who are just open to a change. A few different reasons were given but I actually think Joel Spolsky had it right when he said top developers "barely ever apply for jobs at all. That's because they already have jobs."

This quote isn't necessarily a slight against people who apply actively to jobs. Virtually everyone I know in tech started their career applying to a job. Rather, the message here is that as a developer becomes a mid-level developer and then becomes a senior developer, they are more likely to rely on their network to somewhat passively job seek rather than going through the front door and simply applying on a company website.

Reaching people who aren't actively looking is one area where Read the Docs can really help. Companies want to reach them when they are just thinking about a new job or perhaps passively seeking. Developers who come to our site are actively building software, not job-seeking. Many of them are content at their current position. For those that aren't, this is a perfect place to showcase great companies and help Read the Docs' visitors to find their next job.

Recruiters can be worth it

In each interview, we asked whether the company used recruiters or recruiting related services (eg. Hired, Triplebyte). Universally, hiring managers brought up how expensive recruiters are, but most of the people we talked to who had actually used recruiters in the past had a positive impression overall. Hiring takes a ton of time, typically from senior folks at the company. At smaller startups, that's frequently the CEO or CTO. Even though the price is high, recruiters who help speed that process along are worth it.

I think the quote that really summed it up was from a VP of engineering at a startup that just raised a Series B. He's trying to grow his team by 10 developers this year (about a 50% increase). His experience hiring his first couple developers through a 2-person boutique recruiting firm was great and he would use them for hiring everyone "if hiring 10 people didn't mean $100k+" in fees alone.

Full disclosure: Triplebyte is an advertiser on Read the Docs. We're fans.

Diversity and inclusivity in hiring

We didn't ask any questions around hiring for diversity but fully six hiring managers volunteered information on their companies' strategies for getting more diverse candidates. This is why I love this kind of interview where the goal is just to listen to what hiring managers say and dig deeper when you hear something interesting. Some of the larger companies we talked to had explicit diversity goals set at the company level. Even among the hiring managers at smaller companies, they shared some tactics they used to get more diverse candidates to apply.

Of the companies with hard diversity goals, most of them told us that their strategy entailed syndicating their job openings to diversity focused jobs sites or in some cases engaging directly with relevant interest groups. In terms of efficacy, reviews of these various jobs boards was mixed.

On the more positive side, hiring managers cited Girl Develop It, Black Girls Code, and PyLadies as fantastic channels for both increasing candidate diversity and for high quality applicants. Two companies also talked about trying to decrease bias in their job postings using Textio and similar services.

Having multiple people mention diversity completely unprompted really shows that this topic is becoming higher priority for companies and hiring managers. It also shows that it if hiring for diversity is important to your company, you need to have a plan for actually making those goals a reality. It's worth checking whether the strategy actually works too.

Remember, sourcing is the bigger problem

Every single hiring manager we talked to complained about the time they spent filtering resumes from applicants. Some choice quotes I heard included "95% of applicants weren't a fit" even after only reviewing the resume and a hiring manager who posted to a very popular remote-only job board told me he got "literally one thousand applications". While I believe this is a legitimate complaint, I think Aline Lerner, founder of interviewing.io said it best when she said "Engineering hiring isn't a filtering problem. It's a sourcing problem." The reason we heard it a lot is that filtering is a very time-consuming task that hiring managers directly deal with.

The real problem here is that the number of applicants to a job post is a vanity metric. What hiring managers are looking for is qualified applicants, which is harder to gauge without some additional work. One of the problems here is that a lot of jobs sites make it really easy for candidates to apply to lots of jobs. This is understandable from their perspective as more applicants makes their platform seem more valuable. There's no reason for a job board to put artificial barriers into the application funnel, but hiring managers told us they want candidates who want to work for their company not somebody who is applying to every job out there.

Instead of building product here, I think hiring managers just need a few tweaks to get more of a signal of candidate quality and intent in their applications. A few of the hiring managers we talked to described how they did this. Multiple hiring managers mentioned how they required a cover letter that answered specific questions ("why us" was the most popular). Another hiring manager described how his hiring system just asked a few short questions of candidates -- for example, "what is the software project you're most proud of" -- when they applied. When a candidate didn't do a cover letter or didn't answer the questions, they weren't considered. The latter solution seemed like the best of both worlds as it solves the one-click apply problem without being too much of a barrier.

I'd like to thank all the hiring managers who took time out of their days (or in some cases evenings) to talk to us. If you're a hiring manager or an internal company recruiter and you'd like to share your experiences and help Read the Docs, please get in touch.

Check back soon for our next post in this series which covers tips for candidates based on the same interviews!

Get in front of passive candidates already using your tech by promoting your job openings with Read the Docs.

Tips for Getting a Developer Interview