This post first appeared on the Read the Docs company blog

Last time, we shared how ethical advertising works to keep Read the Docs sustainable without creepy ad targeting. This time, we will share about one of our biggest challenges with advertising. At the beginning of April, Read the Docs was added to one of the most popular ad block lists: the Easylist. 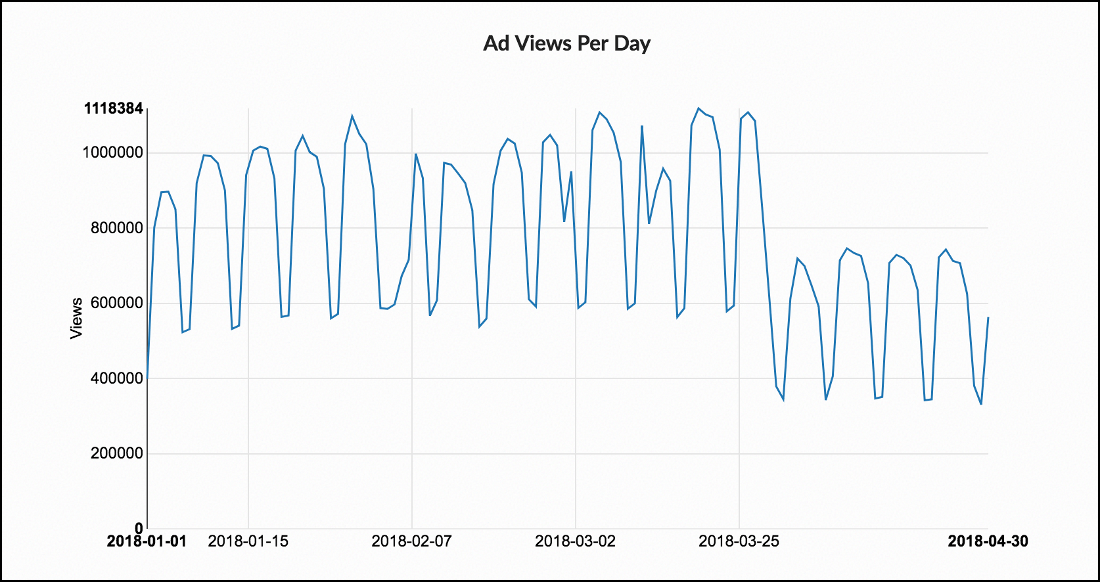 Getting added to the EasyList had a significant and immediate impact on the bottom line at Read the Docs. Right around April 1, 32% of our ad views simply vanished. At first, we thought we had done something horribly wrong but then we discovered that this was due entirely to ad blocking. Our actual traffic wasn't down at all.

Users' browsers were simply downloading the updated EasyList which blocked ads on Read the Docs. In terms of ad viewership, weekdays -- our busiest days and the peaks in the graph -- became more like weekends and weekends fell off a cliff. We had always guessed what percentage of our user base ran ad blockers. Now we know. We knew this day would come as we became more successful but we had hoped it was a ways off considering we weren't part of a large ad network.

This directly affected our operations and staff. Our operating costs didn't go down in any significant way, but revenue sure did. Advertising is by far the largest source of revenue at Read the Docs and it just dropped by about a third. This meant that we had to cut some costs where we could and slow down some hiring plans. While Read the Docs is not a non-profit company, all the revenue is reinvested into the project itself, paying maintainers, and other places in the open source ecosystem. The situation is not dire by any means, but it was certainly disappointing that we ended up on the same list with popup advertisers who couldn't care less about privacy.

All about ad blockers

Ad blockers fulfill a legitimate need to mitigate the significant downsides of advertising from tracking across the internet, security implications of third-party code, and impacting the UX and performance of sites.

At Read the Docs, we specifically didn't want those things. That's why we built the ad network we wanted to exist with only relevant ads and no creepy behavioral targeting.

According to a 2017 report from PageFair (pdf), a company that specializes in quantifying ad blocking, 11% of global web users run an ad blocker. Considering that Read the Docs' core audience is tech-savvy, privacy-conscious developers, it should be no surprise that our number is higher.

What are we doing about it

It will be an uphill battle to get back to where we were in terms of revenue and sustaining Read the Docs, here are a few things we are working on:

While we could simply change our CSS and ad API to avoid blocking since we host our ads ourselves, we decided not to engage in a cat and mouse game since this work would not benefit users.

Advertising funds much of the web and many people recognize that while there are plenty of bad actors in the ad industry -- think pop-under ad networks or ads that navigate your browser for you -- some advertising is necessary to power the web we know and love especially when it comes to open source software which has unique funding challenges.

Update: On May 4th, Read the Docs was added to the acceptable ads list! We will collect data over the next couple weeks and have a follow-up post on what effects this had on advertising.

Likewise, some web users may not want to allow all acceptable ads which includes many ads from the big networks but we are hoping they would be willing to accept ads that benefit their community of software developers.

We are launching a new initiative to allow advertising that benefits open source software. We encourage you to subscribe to the this list and support open source. If you run an open source project affected by ad blockers, we would love to help you too.

This post first appeared on the Read the Docs company blog A few weeks ago, we shared about the challenge …